People can’t agree on many things. One of those things is how many connected devices we’ll have shortly and what the impact of the Internet of Things will be.

This has been going on for years.

Some people predicted that we would have more than 50 billion connected devices by the end of the last decade. However, the number is much more modest than that.

In reality, we can expect to have around 25 billion connected devices by 2030. 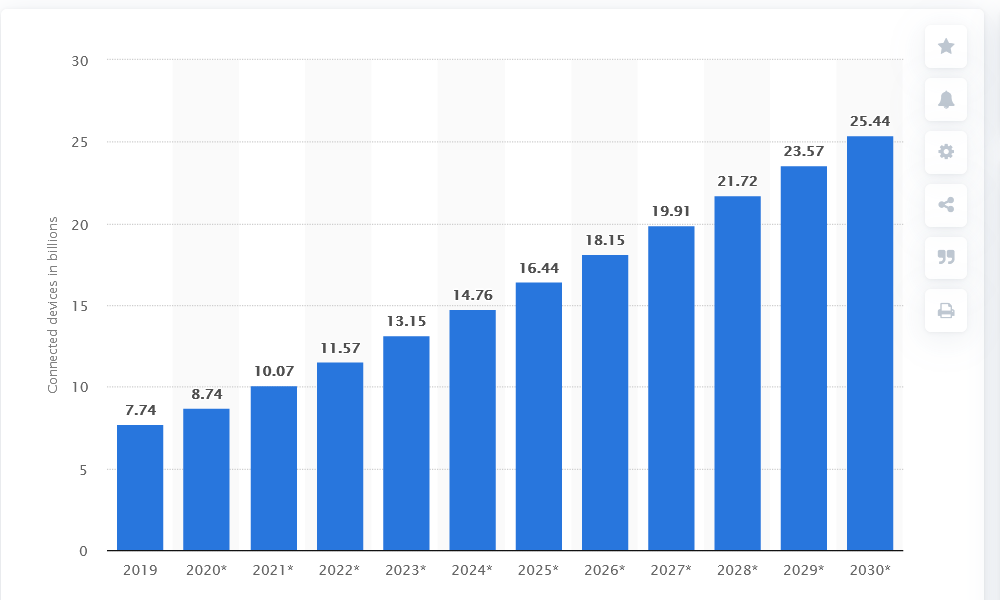 Predictions might seem trivial, however since we can’t even accurately predict the number of IoT devices, can we predict what impact the technology will have? We’re about to find out.

This article will take a look at:

Hottest Application Areas for the IoT

The term “Industry 4.0” is used to describe the latest industrial revolution, driven by smart manufacturing. Even though IoT has affected many facets of our lives, its impact can be mostly felt in the industrial world.

A recent analysis of over 1,414 public enterprise projects identified that a vast majority of them (22%) are taking place in industrial settings. This is only followed by projects in transportation (15%) and energy (14%) industries. 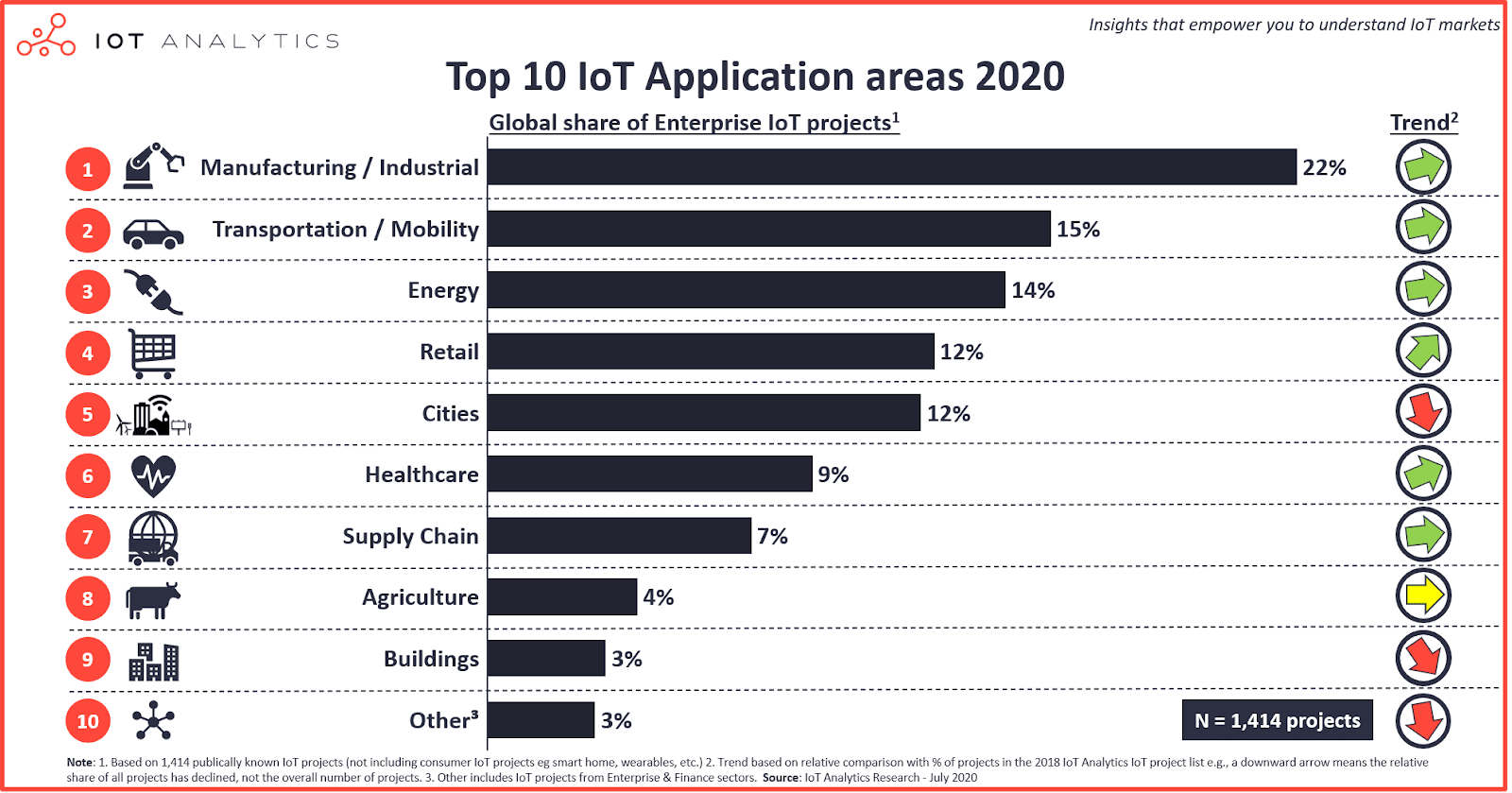 When computers were originally introduced in Industry 3.0 they automated production even further and allowed people to think about more complicated problems. This sped up the production significantly.

In the fourth industrial revolution, humans should have even less involvement in the manufacturing process.

The Internet of Things connects machines and allows them to communicate with each other. Theoretically, this should allow them to make split-second decisions and take any human arguments out of the equation completely.

How much could this help manufacturers? A lot. The impact could also affect the economy as a whole. Research from the global consulting firm, McKinsey says that the economic impact of IoT could reach over $11 trillion in less than five years.

In what ways can industrial IoT help in manufacturing? Just check out the chart below:

Not only could IoT help speed things up, but it could also help manufacturers predict potential issues and solve them in advance. The research from McKinsey shows that more than 50% of problems can be detected in advance by predictive analysis in IoT environments.

As you can see, theoretically, IoT could improve the production process, speed it up, and lessen costs significantly. The only question is, is this possible in real life? Judging by the amount of money invested in IoT-related projects, it seems so. 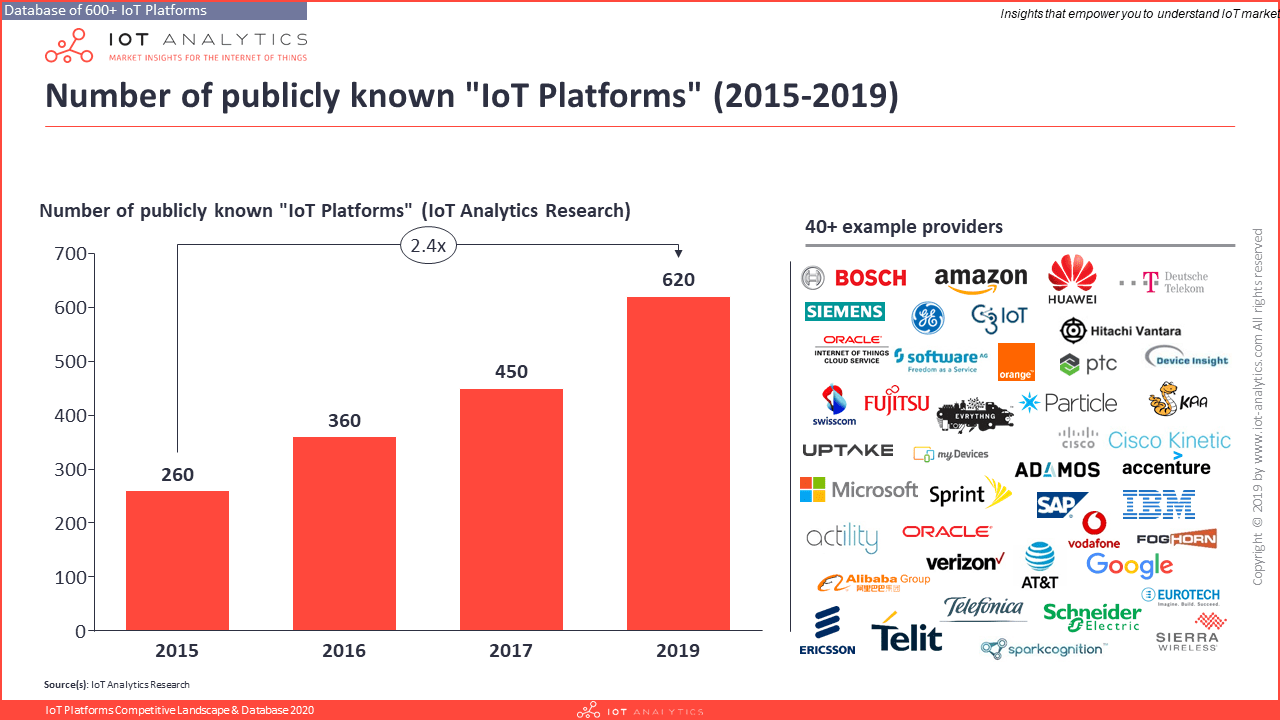 We still may be a long way from having autonomous vehicles on the road, however, driverless robots have found their way onto factory floors in the last couple of years. They’re there to boost the speed and accuracy of routine operations.

Powered by industrial IoT these free-roaming robots can perform tasks with little to no human oversight.

Almost a decade ago, Amazon acquired Kiva technology, which allows robots to locate products and bring them to warehouse workers. During the first year of their launch, Kiva robots helped Amazon cut their overall operation costs by more than 20%.

Investing too much money into expensive capital equipment that ends up being unused costs companies around the world billions and billions of dollars. For that reason, IoT infrastructure has emerged as a popular way of monitoring machine utilization.

Many businesses have begun partnering with industrial IoT companies. One of the more recent examples of this is Machine Metrics’ collaboration with Fastenal, a Minnesota-based manufacturer of tools and fasteners.

Machine Metrics software gave Fastenal insight into machine utilization by the hour, day, week, and month. In turn, that allowed them to make their operation more efficient. During the first 3 months, this translated to an 11% increase in machine utilization and more than 150,000 additional parts produced.

With the help of IoT, manufacturers don’t have to sit around waiting for their machinery to fail. Instead, they can use complex sensors to forecast when certain components will break down with surprising accuracy.

A good maintenance program will help you keep your machines working for years. However, as David Auton of Cushman & Wakefield explains, industrial IoT sensors can be as much as 10X more effective than the best maintenance programs.

Improved maintenance can have a huge impact on quality control since badly-calibrated machinery can introduce unexpected flaws in finished products.

Once you outfit a manufacturing plant with IoT sensors, your worksite manager can start integrating process automation to help operations more reliable. Large amounts of data these sensors can collect can be fed into machine-learning algorithms.

That can give you real-time insights into manufacturing and allow you to improve subpar processes on the go, create more efficient material handling strategies, and ensure a constant output from more than one production site.

Many manufacturers have recognized what role industrial IoT can play in the production process. That’s why more than 40% of all IoT devices will be used in manufacturing over the next decade.

The industrial Internet of Things is changing the face of manufacturing in front of our eyes. How far will the changes go? Again, many people don’t seem to agree on it. Only time will tell.

Even though Industry 4.0 is still in its infancy and we might not have the complete picture for a few more decades, companies that have started adopting IoT realize the Industry’s potential.

To make sure that Industry 4.0 reaches its full potential, these companies need to upskill their current workforce, invest time and money, and have enough patience to make it all work.

The companies that manage to jump on the industrial IoT bandwagon on time will be able to survive, prosper, and push manufacturing further. Now that’s something we can all agree on.